London’s black cabs are about to turn green thanks to a China!

The famous black London cab is about to go high-tech and sustainable following the opening of a new, £300 million ($373 million) factory. The London Taxi Company’s (LTC) car plant is based in central England and has the capacity to assemble over 20,000 electric versions of the iconic taxi a year.

The LTC, a wholly-owned subsidiary of Chinese business Geely, said it had invested over £300 million in the new site and the “next-generation London taxi”.

“Today marks the rebirth of the London Taxi Company,” Chris Gubbey, chief executive of the LTC, said in a news release. “A company with a singular vision; to design and build dedicated urban commercial vehicles that can operate without emissions in cities around the world and bring down running costs for drivers.” 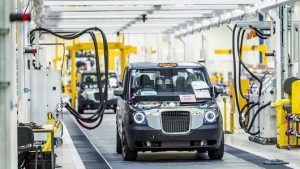 The LTC said that the new electric taxi would go on sale in London later this year, and then around the world at the beginning of 2018.

The U.K. government said the investment was supported by £16.1 million from the Department for Business, Energy and Industrial Strategy.

“Our iconic black cabs are famous across the world,” Greg Clark, business and energy secretary, said in a statement. “The London Taxi Company’s impressive new factory and R&D facility showcases the innovation that makes the UK a world leader in the development of new automotive technologies.”

Wednesday also saw the U.K. government announce an extra £64 million in investment to promote the use of electric taxis.

The funding is to support a £50 million Plug-in Taxi Grant program and a £14 million investment in charge points for electric taxis.

“This government is committed to improving air quality and reducing pollution in towns and cities, which is essential for people’s health and the environment,” John Hayes, transport minister, said.

This CNBC Video is fantastic!